You are browsing in United Kingdom. Do you want to save your location?

Gemstones and the meaning of their colours: complete guide 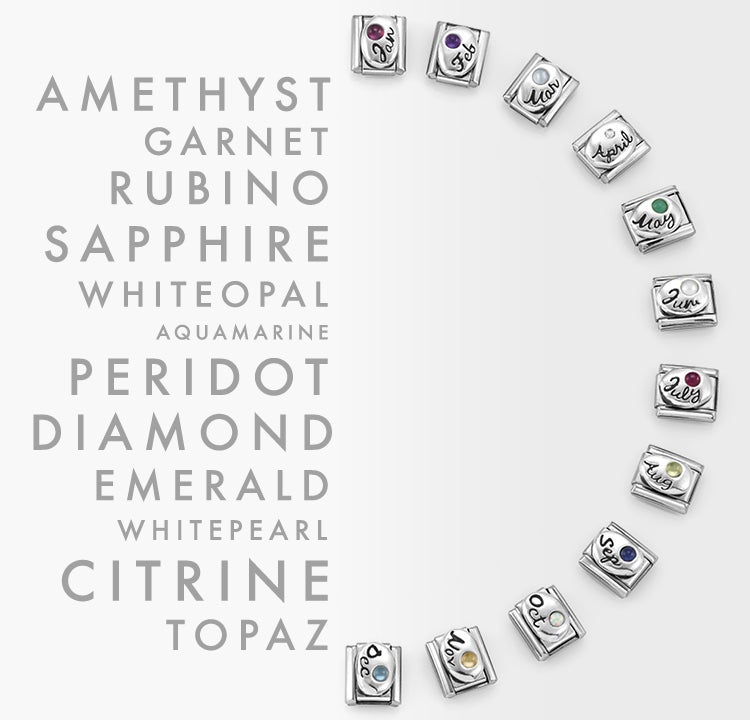 Since ancient times, gemstones have always enchanted all human beings. They have been and still are symbol of wealth, power, culture and charm for both men and women of all ages. Each gemstone and its colour have a special meaning, such as the beauty and the value, which lasts throughout the centuries.

Here you find our guide to choose, among all the Nomination jewels, the precious gemstones that better suit you, with their different colours and meanings.

Blue sapphire and its meaning 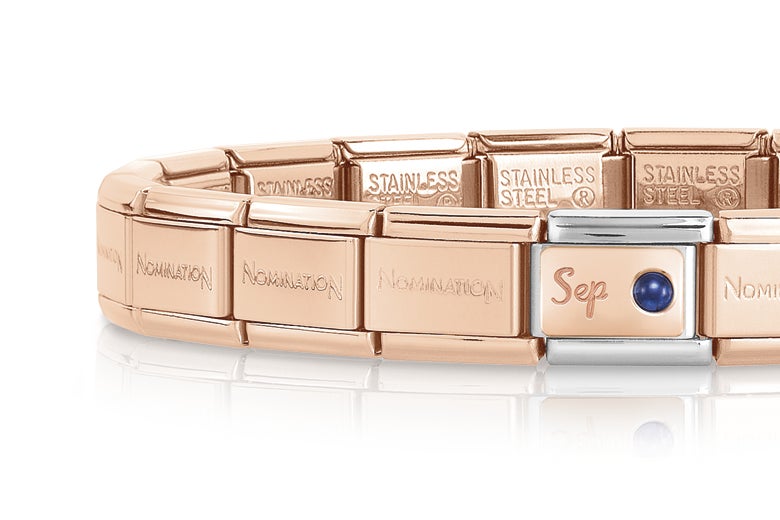 The word Sapphire derives from the Latin "sapphìrus", which also means “blue”. Sapphires are transparent stones which acquire greater beauty by the natural light. Crystal therapy believes these gemstones are able to give peace and serenity to whoever wears them, in perfect harmony with the blue colour, which represents harmony and balance within the emotional sphere.

Among the Nomination bracelets with gemstones, you can find our Classic Composable with blue Sapphire in steel: simple, elegant and stylish.

Peridot: the meaning of this gemstone


An olive green colour, with shades of yellow and brown. The etymology of the word Peridot has different derivation: from the Arabic word "faridat" (gem) and from the English term " pedoretés" ( from Latin: paederot - a type of opal). This gemstone is connected to the heart chakra and completely in harmony with the Earth element.

Peridot was considered as a gemstone with calming properties, and was even appreciated by Pirates, because they believed it was able to expel the evil ghosts and vanquish the fear of the dark.

Create your Nomination Composable Bracelet and your world of gemstones and jewels will definitely come to life! Choose the Nomination Link with a Peridot to reduce and alleviate excessively strong emotions, perfect to treat yourself or as a gift to a particularly anxious friend, to play it down!


The word Citrine derives from the French "citron", which means "lemon", for its typical lemon yellow colour. For the ancient it was the gemstone of happiness, also used as a talisman against all the bad thoughts.

Crystal Therapy believes that the Citrine is able to stimulate the mental capacities and creativity, intuition and self-confidence, by enhancing the control of the emotions. Moreover, the yellow colour has a symbolic meaning connected to the light, the knowledge and the energy, both physical and mental.

Our Composable Tile with the Citrine natural semi-precious stone is ready to brighten your life.


The Emerald is one of the most famous and coveted stones, very appreciated even by Queen Cleopatra, who was also known for her Emeralds. The word derives from Greek “smaragdos”, which means “ green gem”.

During the Crystal Therapy treatments, the Emerald is used to relieve the auric emotional field from bad thoughts. Get back your inner peace through our Nomination green Emerald Link!

Aventurine: the meaning of the stone


The Aventurine is a stone able to bring optimism and patience and support the inner growth. The name comes from the Italian expression "a ventura", which refers to the flakes of material that make up its surface.

This sparkling stone is considered as a real lucky charm and was used in ancient propitiatory rites or to adorn the eyes of the old Tibetan statues. No coincidence that the Aventurine is closely linked to the sense of sight and recommended in Crystal Therapy in case of eye diseases and to enhance visual faculties.

The shades of green lead to a higher spiritual opening also increasing empathy. Wear the Link with your Composable Bracelet in steel and rose gold with an oval Aventurine stone.

Blue Topaz and its meaning


The Blue Topaz is among the most ancient, precious and desired stones and has several colour shades and varieties. It is actually uncoloured when chemically pure and can get different shades depending on the minerals which characterise the deposit.

The Blue Topaz is very stylish and the Crystal Therapy believes that it exerts a sedative action on the respiratory system. It relaxes both body and mind and stimulates good thoughts. The meaning of the blue colour lies in the communication through the creativity, emblem of idealism and harmony with our neighbour.

Among all Nomination Bracelets with coloured stones pick the Composable enriched by a Topaz!


The word Opal is adapted from the Latin term “opalus”, which comes from the Greek word “opallios" and means "to see a change". To the ancient Greeks the Opal embodied the ability to predict the future, while for the Romans it was an emblem of hope and purity. The white Opal, both opaque and translucent, according to Crystal Therapy, promotes confidence and clarity. The meaning of the white colour is actually precisely linked to trust in others, genuineness and optimism.

If you need a gift for a sweet and gentle girl-friend, the Link with Opal stone may be perfect to be matched with other jewels characterised by precious gemstones of the same colour. For example the Classic Composable Link with a flower enriched by a White Nacre, also known as White Mother Of Pearl, used since ancient times in in artistic works and inlaid designs.

The meaning of the Lapis Lazuli stone


When analysing its chromatic gradations, starting from an intense and lively blue colour, the most beautiful colour of Lapis Lazuli is certainly the uniform royal blue. It’s a stone already appreciated by the ancient Civilisation of Mesopotamia and has always inspired artists and philosophers through its appearance which recalls the vault of the night sky. It’s a symbol of strength and considered by the ancient Romans as a strong aphrodisiac.

Lapis Lazuli is also among the most famous stones used within the Crystal Therapy. It helps to regulate themenstrual cycle and acts on blood circulation by reducing the blood pressure. If this stone made you fall in love, then choose among our Nomination Tiles the one with a heart shaped Lapis Lazuli, perfect to give to your partner.

The meaning of the Amethyst


Amethyst is linked to meditation, balance and greater openness. The word directly comes from Amethystos, which literally means “ not drunken”. Among all the myths about this stone, there’s also the one which reveals it as a special means to stop the alcohol effects, by avoiding the person from getting drunk, by adding it in the glass with the alcoholic drink.

All the purple stones - also including the Amethyst - are among the most used when there’s a need to act on the spiritual field. The meaning of the purple colour is linked to the mystery, the magic and the metamorphosis concepts. Here is a silver Tile with Amethyst to customise your Nomination Composable Bracelets.

The meaning of the Jade stone and its colours


The Jade stone represents the power of Mother Nature and of the ancient matriarchal cults. It has a very strong meaning within the Chinese culture, fully linked to the immortality concept and to the power to set up a bridge between sky and earth. Energy and dynamism are the characteristic features of this stone which infuses wisdom and promotes self-realisation, independence and strengthens the personality.


The Crystal Therapy believes that the Black Jade can defeats psychic aggressions when defences are very low. The meaning of the black colour is that of the border between two different entities and represents strength and sacrifice. Wear black colour with great style, wear a Bracelet with silver circle in Black Jade from our Gioie Collection.


The Orange Jade is the symbol of joy and happiness, but also of connection and empathy between people. The meaning of the orange colour is connected to the inner harmony, to the sexual liveliness, self-confidence and faith in others. For a cheerful and vital girl-friend, choose a Necklace with the symbol of the sun in silver and orange Jade from our Gioie Collection!


Its name speaks for itself, highlighting the strong connection with the sea. An unmistakable colour, from pastel shades to deeper blue tones, with those special greenish highlights. Since ancient times, for sailors, it has been a special amulet to ingratiate themselves with the god of the seas, Neptune.

Aquamarine is a stone charged with positive vibes and with calming and purifying effects. Symbol of youth and happiness, it represents a good omen to be given to newly-weds, or to someone who deeply loves the sea. It is also perfect for a child who is learning to swim.

The Aquamarine is characterised by all the shades of the cyan blue colour, as charming as our Classic Composable Link with Aquamarine stone.

Precious as… a Ruby and a Diamond: discover their meanings 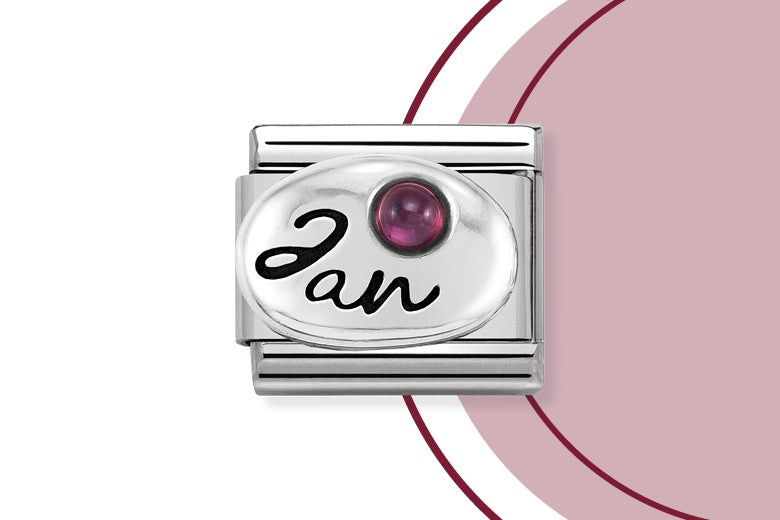 Ruby is one of the most expensive and rare gems and its name comes from the Latin word “ruber”, which means “red”. It has always played a key role within myths and legends and represents passion, love and romance. The meaning of its iconic red colour is inevitably connected to blood and vital energy symbols, both mental and physical. A vibrant colour that symbolizes strength.

Among its jewels with precious and coloured stones, Nomination offers its Classic Composable Link in rose gold with a Ruby.

A combination to link the power of red, which is a primary colour, with one of the desaturated gradations that derive from it: the pink colour. The meaning of the pink colour is connected to female vitality, to the exchange in giving and receiving love. It symbolizes openness to others, forgiveness and tenderness.

If this colour connected to the female universe makes you tick, you can match it with those defined by the iconic Marilyn as “ a girl’s best friends”: of course we are talking about … Diamonds! Among the most well-known and precious wonders, the ancient Romans considered them as tears of the Gods. Leonardo Da Vinci believed, however, that a diamond worn on the finger could make you invincible before the enemies.